This article is part of our latest Design special report, which is about crossing the borders of space, time and media. According to the Environmental Protection Agency, Americans spend about 90 percent of their time indoors. If the experience of sheltering in a pandemic has taught us anything, it is […]

This article is part of our latest Design special report, which is about crossing the borders of space, time and media.

According to the Environmental Protection Agency, Americans spend about 90 percent of their time indoors. If the experience of sheltering in a pandemic has taught us anything, it is the outscaled importance of that other 10 percent.

“Being in nature drops our cortisol levels, makes us calmer, reduces anxiety and improves our mood,” said Bea Pila-Gonzalez, an interior designer in Miami. “It’s a physical yearning. We are hungry for the experience of what the outdoors brings to us.”

This appetite is the subject of a newly released book, “Biophilia: You + Nature + Home” (Kyle Books, $21.99). The author is Sally Coulthard, an interior designer and writer based in North Yorkshire, England. She recounts how biophilia, the idea that humans are viscerally wired to feel a communion with the natural world, has shifted from a hypothesis espoused by the biologist Edward O. Wilson and others to the emergence of urban beekeeping, increasingly diverse city gardens and wild ideas for residences and workplaces.

“Companies here are creating gorgeous lighting schemes that either incorporate plants into their design,” so you have “lighting that mimics the sky, or uses natural materials in some new or interesting way,” Ms. Coulthard said of Britain. “Others are using moss walls or are bringing large trees into indoor environments.” One of her subjects even makes home air filters from living plants.

The biophilic compulsion to unite indoors and outdoors is leaping beyond the familiar tropes of eco-sustainability — natural fibers, salvaged lumber and the war against carcinogens and toxins. Adherents want not just personal and environmental health but also psychological and spiritual well-being.

“A lot of people who come to me are seeking tranquillity and a meditative feeling,” said Gennaro Brooks-Church, the owner of Brooks-Church Living Walls in Brooklyn, which designs and installs the vertical panels of plants that an increasing number of Americans have in their homes and offices.

He said from 2018 to 2019, he received a 67 percent increase in commissions. But a slice of the outside does not come cheap. He charges $20,000 for a 10-by-10-foot wall, for which he uses more than 600 plants, including philodendrons, orchids, African violets and xanthium. “Each is purposely placed to create a visual ordered chaos,” he said. The “colors, natural patterns of the plants and textures are something we deeply resonate with.”

The tug of biophilia also means that plant matter used to cover interior surfaces has broadened beyond the living wall’s garden-variety ferns and succulents. Innerspace, a company in Cheshire, England, designs feature walls consisting of preserved moss, foliage, bark and charred timber. In 2019, it created about 250 of these for homes, offices and even hospitals — twice the quantity of the previous year, said Ian Lamb, the company’s managing director. For a day-care center in North London, it fashioned bark and moss into a two-dimensional tree that surrounded an interior doorway; to move from room to room, the children must walk through the trunk, which suits them just fine.

A number of biophilic projects pay special attention to the transition between exterior and interior. Canopy a residential tower in Hong Kong by Boutique Design offering 54 luxurious duplexes, each surrounded by a private garden, which are about 525 square feet, references in its cylindrical form a tree amid the city’s striking natural landscape.

Even more unusual is the plant-studded structure that pierces the two-family Stairway House in the Shinjuku ward of Tokyo, rising through several floors. “There are four seasons in Japan, and living in a space exposed to these seasons has become a luxury,” said Miho Okuyama, a representative of Nendo, the Japanese studio that designed the house.

In the case of Temple Beth Tzedek, in Amherst, N.Y., near Buffalo, the transition is visual rather than physical. After merging with a neighboring conservative synagogue last year and absorbing new members, the temple expanded its footprint with a 10,000-square-foot addition situated in a wooded area. A window behind the altar in the sanctuary is 60 feet wide and 35 feet high, giving the congregants a feeling of praying in the forest.

Gazing out, worshipers see “one particular tree toward the middle left that seems to just reach for the sky — which makes you look up toward the heavens,” said Harvey Sanders, the chair of the temple’s project committee.

The ark admits daylight through glass, and the use of timber, including huge glued laminated arches, creates warmth and recalls the style of historic synagogues in the Polish-Lithuanian commonwealth.

“The wood looks to the past and a more sustainable future,” said Moe Finegold, a principal at Finegold Alexander Architects, which spearheaded the project. “We created space within a space. You’re in a small world but looking out into the universe.”

A London Home Goes From Georgian to Modern, With a Detour

Sun May 31 , 2020
This article is part of our latest Design special report, which is about crossing the borders of space, time and media. When Heather Kane was scouring her favorite London neighborhoods two years ago searching for an apartment to buy, she discovered a promising candidate on the first floor of an […] 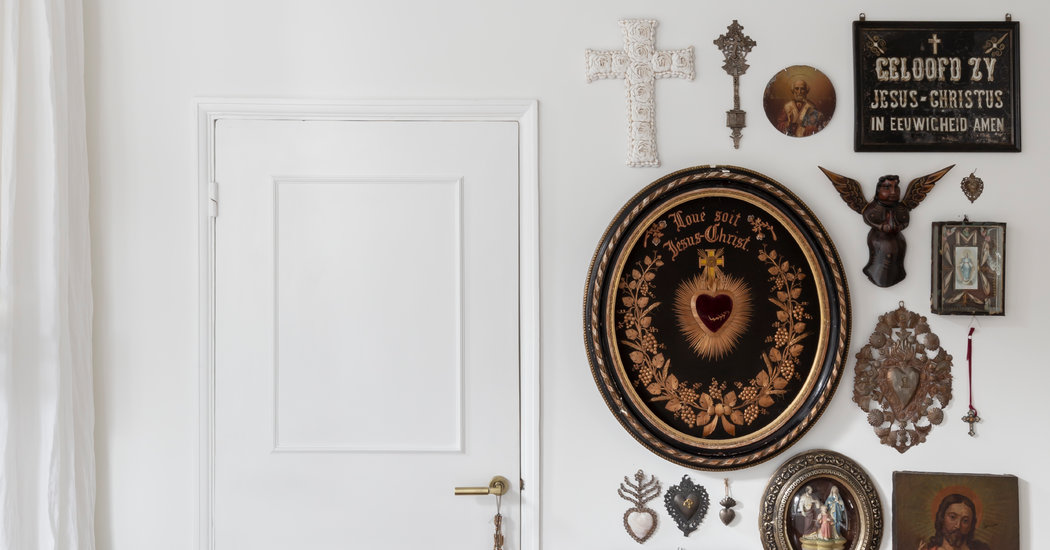